Holt Renfrew debuts an expansive renovation and restoration in a historic Montréal building once occupied by Ogilvy.

IN 1912, STORIED Canadian department store Ogilvy debuted a flagship with a dramatic Romanesque Revival exterior on the corner of Montréal’s Saint-Catherine Street West and Rue de la Montagne, a modern architectural marvel of its time. The Ogilvy brand was purchased by London-based Selfridges Group in 2011, and more than 100 years since the flagship originally opened, Holt Renfrew, also owned by Selfridges Group, acquired the historic corner property, keeping the Ogilvy moniker for the location to become Holt Renfrew Ogilvy.

New York-based Jeffrey Hutchison & Associates was charged with modernizing the interior while respecting Holt Renfrew’s luxury status and retaining the original intent of the historic Ogilvy design – or as Jeffrey Hutchison, President, puts it, his firm had to reimagine the store as the “modern grande dame of Rue Catherine.”

Ensuring the new, modern design respected the site’s heritage as a local cultural landmark was imperative, so the team spent hours examining old photographs of the space in order to get a sense of its original aesthetic. The new aims to complement the old with wide aisles, expansive windows and a range of sophisticated and tactile materials like cream terrazzo, gray stone, bleached oak wood floors, brushed brass and satin nickel.

Fifty-seven steel columns were clad in fiber-reinforced polymer material to give them an octagonal shape.

During the design process, a development next door – which includes a Four Seasons hotel and a high-end residential tower – had space available for Holt Renfrew to spill into, adding 40,000 square feet to the project and bringing the total square footage to 250,000. (A connection between the men’s level on the fourth floor conveniently leads to the Four Seasons lobby.) “It really became a part of this bigger development of the entire block,” says Hutchison, “which gave it much more depth and dynamic character.”

Structurally, the design team had to contend with the 57 internal steel columns spaced every 20 feet on each floor. “The structure is actually one of the most important parts of the building’s history, and we wanted to celebrate that and not disguise or hide it,” Hutchison says. “Purposely, where we could, we tried to leave them as a design feature. That creates a certain rhythm of the space, a certain organization.”

Designers clad the columns in fiber reinforced polymer (FRP) material to make them an octagonal shape and carried the same design through each floor, providing a level of visual consistency. “They feel proportional, like spatial objects instead of impediments in the space,” says Hutchison.

To further amplify the visual consistency between departments, a “ribbon” wall surrounds the perimeter of each floor, allowing brands to feature their own materials without hindering the store design, keeping a balance between brands’ own designs and the store’s overall look and feel.

In decades past, this locale was dubbed the “Store of Light,” because of its “loft-like” interior, according to Hutchison. Over the years, windows in the space were closed up, so to channel the days of old, the team made sure the design allowed for as many windows as possible to let in the maximum amount of natural light. Now, most floors feature between 13- and 18-foot-long windows overlooking the Montréal cityscape.

“The biggest challenge was the existing structure,” says Hutchison. “Montréal is in an earthquake zone, and we had to upgrade the structure to meet current earthquake codes, while at the same time preserving the effective retail space, while constructing the store in multiple phases. We didn’t want any of the earthquake structure that we had to add to impact those windows.”

Once known as the “Store of Light,” great measures were taken to ensure windows remained unobscured.

Other notable feats included adding a decorative staircase that connects the main floor with the store’s Beauty Hall on its concourse level; the stairs connecting the second and third floors were renovated.

“Once you arrive on a floor, you have this completely open vista from one side to the other, and you immediately feel a sense of openness, space and light,” Hutchison explains.

“You have this juxtaposition of the new, modern personal shopper suites and the historic, readorned, classic part,” explains Hutchison.

As is the case with many department store projects, Holt Renfrew Ogilvy opted to remain open during construction, the final phases of which were completed in June 2020. In the end, it’s safe to say the modern grande dame of Rue Catherine has made her resplendent re-entrance in Montréal. 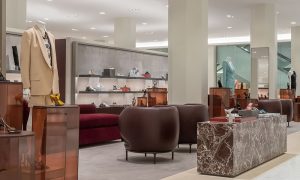 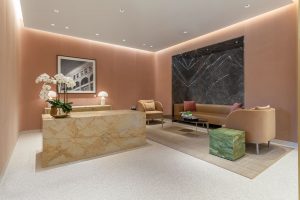 Related Topics:Holt RenfrewJeffrey Hutchison & Associates
click to Comment(Comment)
Up Next

Are Influencers the New Visual Merchandisers?

Carly Hagedon is the Managing Editor of VMSD magazine. She lives and works in Cincinnati and is a graduate of the University of Cincinnati, where she studied Journalism—Magazine Writing and American history. She also currently serves as a board member for the Greater Cincinnati Chapter of the Society of Professional Journalists (SPJ).

Athleta to Expand into Canada