This is the first of a three-part trend report on Asian restaurant design. Additional reports cover Shanghai's Yong Yi Ting and P.F. Chang's in Laval, Canada.

“The Asian restaurant market is quickly recognizing that the environment that their food is being served in needs to match the quality of their offerings, and that the ‘bright lights and laminated tables’ mentality doesn’t suffice anymore,” says Lisa Chan, associate director of the Melbourne-based B.Y.Architects in Australia. “This has resulted in a demand for restaurant designs that are more sophisticated, but still playful and original.”

And today’s Asian joints don’t simply target the naïve consumer expecting wontons and fried egg rolls amidst trite scrims and glass tabletops. High- and mid-range locales alike blend hints of home for Asian diners with fresh, western touches that lend a cosmopolitan air. That often means generous use of reds, golds and wood with the slimmed-down aesthetic populating so many western restaurants. Lighting is warm and bright and private dining rooms, particularly in luxury venues, are a must.

Melbourne-based Man Tong Kitchen, designed by B.Y.Architects, illustrates these trends while targeting a mixed clientele in Australia. Part of the Crown Entertainment Complex, it competes for eyeballs – and palates – with a range of other dining options at varying price points along the Yarra River.

“Traditionally, red symbolizes luck and gold or yellow signifies wealth and fortune, so the color palette selected was intentionally very rich and evocative of Chinese symbolism,” says Chan. “However, the palette also needed to appeal to a western clientele, so the rich colors were paired with the more muted base tones of charcoal flooring, walnut timbers, concrete rendered walls and brown and grey brickwork.”

Designers evoked China with textured grey floor tiles similar to cobblestone village streets, splashes of red reminiscent of cultural celebrations, laser cutout screens with Chinese patterning and a lantern-lit pitched ceiling. That graceful ceiling, which measures about 16.5 feet at its apex, posed a challenge to the B.Y. team, whose members had to work carefully to integrate rafters evenly among existing columns and openings. Designers from PointofView Lighting (Melbourne, Australia) collaborated to add custom lanterns and uplight the rafters for an airy, spacious feel.

Because the client asked that a Chinese teahouse be woven into the design narrative, traditional teahouse seating in the main dining area was juxtaposed with modern banquettes alongside a cluster of bird cages. (It was once common to see elderly men sipping and socializing with caged pet birds in tow.)

Added spatial drama, Chan says, “is created by offsetting the volume of the main dining space against more intimate private dining rooms and tighter corridors.” It creates a sense of warmth and dynamism inside the restaurant which, since its opening, has become the translation of its Chinese name – a full house. 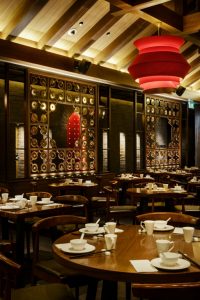 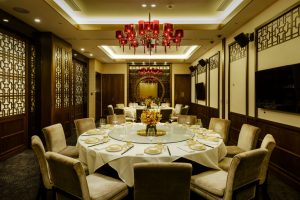 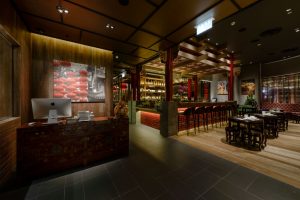 Retail Foodservice on the Rise