For Mercedes-Benz’s expansion of its 50,000-square-foot showroom, Huntsman Architectural Group (San Francisco) designed four independent buildings to house the showroom, sales, administrative offices, service and storage. Each area features a clean, bright palette of gray, silver and white and incorporates an abundance of glass to bring in natural light.

In the first building, which is home to a two-story-high showroom, designers created a cylindrical glass tower where new auto models are displayed. Large glazed windows create a visual connection between the showrooms and adjacent streetscape.

Lighting had to be at a relatively low light level in the showrooms, according to designers, to enhance the appearance of the cars and make the paint reflect with a glass-like smoothness.

The second building is a slender, three-story glass-enclosed atrium that connects the two showrooms and features a media wall with flat screens against ash-colored wood. A third houses the service department with in-ground car lifts to maintain a clean aesthetic when not in use. 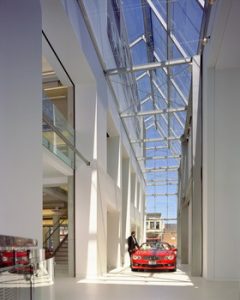 The New World of Coca-Cola

Athleta to Expand into Canada