Gensler was approached by Indian manufacturer Godrej & Boyce Mfg. Co. Ltd. (Mumbai, India) to create a new home furnishings brand that would speak to a younger audience. “India has come a long way in development and a huge percentage of the population has been educated outside of country; [they] have a global perspective,” says Alison Carr, Design Director, Gensler. “We wanted to tap into that market.”

BEFORE: Script prior to renovation.

The team did just that by creating an open floor design that would not only allow the merchandise to speak for itself, but also highlight the product designers, much like one might see in an art gallery. “We planned the space as a series of apartments,” says Carr, who viewed it as one ecosystem. “There wasn’t a separate chair department or sofa department.” Brass inlays and accents throughout the interior pay homage to the company’s heritage as a lock manufacturer.

But the aspect that most took Carr’s breath away was the façade. “It’s very unique in that it can adapt,” she says. “The logo is integrated into perforated metal and is backlit at night.”

The final project  – showcasing the goods in a natural way while plugging into a millennial audience – is one the judges found to be entirely successful. “They have a clear mission, and it’s an aspirational one,” says Jim Kelly, Design Manager, Macy’s (Cincinnati), a judge for this year’s competition. “They’re telling a story, they like great design and that’s why [it has] a museum-type execution.”

To learn more about this year's Retail Renovation Competition winners and honorable mentions, be sure to check vmsd.com throughout the month of September. 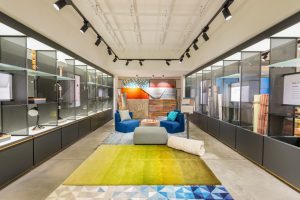