Shoppers may be focused on value and discount prices, but that doesn’t mean they want to see only “Huge Sale!” signs hanging in store windows. “People are being inspired by hand crafting,” says Steve McGowan, executive creative director at Landor, a Cincinnati-based branding firm. “They’re searching for things that are warm and welcoming.”

Uniqlo visual director Mihee Yi says a craftier style is more approachable for consumers who are less inclined to spend money right now. “It’s softer and less sales-y,” she says. “And customers appreciate the fact that instead of throwing money at visual displays, you’re throwing time and intelligence at them.”

A year ago, during the judging of VMSD’s International Visual Competition, the judges noted that retailers seemed focused on simplicity in their visual displays to cut through the barrage of messaging going out to consumers. This year, judges say that theme has gone even further – partly driven by necessity, due to shrinking visual staffs and budgets. “It’s all about how you make the visual cost-effective,” says Beth Harlor, associate director, CBDi Design at Procter & Gamble (Cincinnati), and a judge at this year’s competition. “Retailers are not using as many props.”

HUMBLE ORIGINS
But they’re still connecting with consumers. For a display touting Uniqlo’s spring 2009 collection, which debuted in late 2008, Yi and marketing manager Jean-Emmanuel Shein wanted something that would inspire “more than just a casual glance while walking in and out of the store,” says Yi.

Working with display and vinyl vendor Carl Odhner, owner of Grafconect (New York), they came up with the idea of a gallery-like setting for miniature replicas of polos, denim, outerwear and t-shirts. The doll-sized outfits hung inside 30 small glass boxes fitted with Fresnel lenses that wrapped around a red, floor-to-ceiling box inside the New York store. Yi says the display created quite a buzz among shoppers (“It was amazing how much time people spent looking at the windows”), as well as this year’s judging panel, which named it Best in Show. “It’s such a great gesture of authenticity,” says judge David Hogrefe, managing director, Fitch (Powell, Ohio). “The repetition of squares is so simple but the focus is on the quality.”

McGowan adds that the presentation “totally captures your imagination and draws you in. You’re going to look inside every one of those boxes.”

Clever materials can be another way retailers delight and entertain shoppers. Judges were almost speechless when they discovered the main component of Hudson Bay Co.’s Cashmere Cancer Awareness windows. The Bay had asked Canadian designers to create dresses made completely of Cashmere-brand bathroom tissue, which was donating proceeds from its sales to cancer research. The gowns were displayed in store windows and throughout the store, strikingly posed next to artists’ original sketches.

Matt Beal, senior designer at Checkland Kindleysides (Leicester, U.K.), was also inspired by “a return to simple, utilitarian and sustainable materials.” Checkland’s material of choice was masking tape, for the Converse’s 1Hund(RED) campaign, which celebrated the philanthropic efforts of the (RED) charity. In one area, the tape was used on the display’s red walls to write artists’ names next to their customized Chuck Taylors. Local artist Kay van-Bellen also created a skyline illustration of London with tape for the display.

Tracey Peters says the visual staff at Holt Renfrew is constantly poring through art books for inspiration and regularly contracts with local artists. To highlight the resurgence of florals as a trend in fashion prints, the Canadian department store looked at the graffiti work of artist Shepard Fairey for inspiration and sought help from seven graffiti artists for a spring window theme, which earned an award of merit in this year’s competition. “The only items in the windows were the mannequins and fashions, but the graffiti background was so vibrant and strong,” says Peters, Holt’s national visual and merchandising manager. Our judges agreed.

As in-store displays and store windows work harder than ever to attract shoppers’ attention, judges note that retailers should focus on authentic messages and materials to turn the everyday into the unexpected. “It’s all about the craft of building arresting visuals,” says McGowan.

Follow the links below to see each individual winning project: 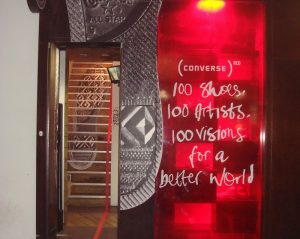 11 Funny Memes That Only Visual Merchandisers Will Understand

Amazon “Under Siege” as New Boss Takes Over for Jeff Bezos