Every brand wants a store in SoHo, the trendy New York shopping district in lower Manhattan. But once they commit, so many of them seem to ask, “Why?”

Crocs, the popular shoe brand, no doubt asked that question several times during the four years between 2006, when it signed for a corner space on Spring and Wooster streets for its first branded flagship store, and 2010, when the bright new store finally opened its doors.

What took so long? The same thing that drives many similar voyages dangerously close to the rocks: the requirements of the New York City Landmarks Preservation Commission.

In SoHo, that means not tampering with the neighborhood’s centuries-old architectural history and integrity. “It’s a noble idea,” says Adrian Johnson, president of Elan General Contracting Inc. (San Diego). “But some of those challenges added considerable time and money to getting this store built.”

Crocs had decided on a nearly 200-year-old building. “As we discovered all the crumbling brickwork, powdering mortar and rotting timber, we felt the only way to preserve this project would be to tear down the exterior wall and rebuild it,” says Johnson.

The Landmarks Commission had other ideas, insisting that the builders preserve the wall. It wasn’t until the New York Department of Buildings inspected the wall and condemned it that Elan was able to rebuild the wall, using about 60 percent of the original brick and casting the lintels and sills from new material to look exactly like the originals. All the doors and windows were also replaced with similar styles and materials.

But the site actually consists of two adjoining buildings. The protected corner building, an 1818 construction, is one of the few remnants of federal period architecture in the city. The neighboring property along Wooster Street had no landmark protection. The next challenge became blending the two properties seamlessly into one 1850-square-foot store.

The Landmarks Commission inadvertently provided the solution, demanding that the design uncover and expose four original windows on the wall between the two buildings. “So we created an architecture that showcases the historic building,” says Bill Morgan of Morgan Design Associates (Golden, Colo.), the project manager, senior store planner, designer and contract administrator for this and the other 100-plus Crocs stores Elan has built. Instead of replicating the federal architecture, though, they built a contemporary, two-level structure with large show windows. All that glass exposes the historic windows and also offers vast sightlines into the store from outside.

“While retaining many of the historic values in the landmark building,” Morgan says, “we wanted to introduce some of the ultra-contemporary features of the new building into the old building to tie them together as one unit on the inside.”

Because the low ceiling heights in the historical building couldn’t be altered, Morgan fell back on an architectural trick perfected by Frank Lloyd Wright. “As you pass from the 8.4-foot ceilings of the original building into the new space,” he explains, “I raised the ceiling an additional seven feet, then another five. Those increasing planes of height, plus the use of clerestory glass, gave the illusion of a great deal more spaciousness than there actually is.”

The struggle paid off. In its second day of operation, the SoHo store had become Crocs’ most productive store. So the company chose as its next set of sites Chicago’s Palmer House Hotel, Boston’s Faneuil Hall and Honolulu’s Princess Kaiulani Hotel – all landmark-protected properties.

As Elan’s Johnson jokingly moans on the company’s web site, “Why me?” 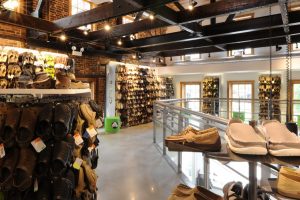 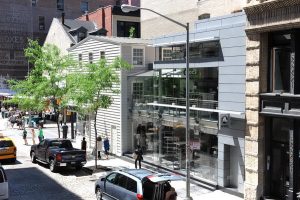 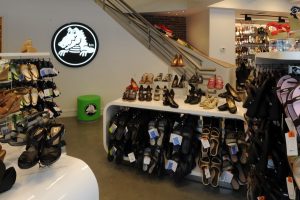