A LENGTHY PRE-CONSTRUCTION PROCESS paired with an enthusiastic team made for a winning combination in the mammoth task of designing and constructing Nordstrom’s (Seattle) Manhattan flagship store – the largest retail construction New York City has seen in decades.

“The enormity of taking on the challenge of planning and designing a world class flagship destination for Nordstrom was daunting at first,” says Murf Hall, Design Director for Nordstrom Design and Construction. “From the very inception of the project – starting at the Men’s store, really – we had a singular vision of the once-in-a-generation opportunity we had to add a retail landmark to the Manhattan landscape. Keeping true to that vision even as the project evolved through the planning and design process allowed us to end with such an amazing result.”

A project this size almost requires a few hiccups. Take, for instance, the façade, designed by New York-based James Carpenter Design Associates. “5 Columbus Circle is a pre-war building, and it’s landmarked,” Willis says. The team was tasked with bringing the façade into the 21st century without sacrificing the integrity of its historical bones. It’s a subtle undertaking with many headaches, and Willis says the greatest accolade is when people don’t necessarily notice. “People walking past that building will never know the amount of work it took to get it in place,” he says. “People walk by and think it was always there, which is a huge compliment when you’re doing something like this, given the enormous complexity of the project.”

Bridgette Hyde, Associate VP from Baltimore-based interior design firm CallisonRTKL’s Seattle office also mentioned the importance of the façade. “This project is really the culmination of design tenets we introduced years ago – clear, light, warm, timeless,” she says. “We’ve been gradually peeling back the hard edges of department store design to create open, inclusive spaces with more natural light and better amenities. Why limit yourself to storytelling in a display window, when the entire building can be a display window?”

While the façade is one of Willis’ favorite aspects of the design, what takes his breath away is what happens once you walk in the front doors. “When you walk over to the escalators and you look up, it’s amazing,” he says. “You have twelve huge escalators perfectly stacked up on top of each other over eight floors. That to me is one of the wow factors of the project.”

The escalators’ design is organized, pleasing and economical – and just one of the many aspects that consumed the imaginations of the judges. “I’m completely taken with Nordstrom,” says 2020 Renovation Competition judge Eric Daniel, Creative Director, Fitch (Columbus, Ohio). “The quality of the design is incredible. The real advantage of this project is the level of experience the designers have raised in this box – the restaurants, the special shops, the cocktail bar in the shoe department. That’s a social event in the midst of what Nordstrom is best at.”

With almost 100 consultants on the design team and the enthusiasm from the Nordstrom, JLL and various other design teams, Willis says it was a true collaboration. That collaboration, upon Willis’ account, was the key to their success. “The JLL team was the conduit between us, the ownership group and the developers,” he says. “They did so much of the behind-the-scenes work to help make it go smoothly.”

“You pick up the papers or you read online all these stories about retail being dead – ‘brick-and-mortar is on the way out.’ Nordstrom made a massive investment here in New York City. People really love working for the Nordstrom brothers. When we walked through the spaces with them, they were so appreciative and so down to earth. I’ll be honest, we just wanted to succeed so much for them – and we did,” Willis says. 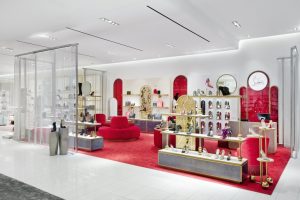