For the second straight year, VM+SD held a design competition for independent retailing (defined by the National Retail Federation as having annual revenues of $5 million or less). The magazine's editors deemed the following seven entrants worthy of honor, based on their inventive answers to problems and objectives – especially those specific to independent retailers (budget, space, time and availability of resources).

Here are our 2002 Independents Day firecrackers:

Fashion Statement is a small, independent, classic-yet-contemporary specialty apparel store in upscale Wyckoff, N.J. “The typical female Wyckoff resident is a stay-at-home mom in her 40s,” says owner Sheryl Brian, “active in her children's school and other activities. She's affluent, college-educated, physically fit and has sophisticated taste in clothing, decorating and dining.”

The design objective for Englewood, N.J., architect David Kepron was to create a unique, “classic contemporary” flair, an environment that's bright and clean, and a backdrop for multiple vendors.

Large feature walls were created to merchandise goods in front of the windows. Elliptical tables allow for the possibility of bulk-folded presentations and also promote uninterrupted views through the space to the perimeter walls. Existing columns were utilized as vertical merchandisers.

California's top universities sought a market for their apparel, gifts and souvenirs in one of America's fastest-growing retail sectors – the travelers between planes, heading for planes or waiting out interminable security delays.

According to Ellen Schumm, principal of Tsao Design Group (San Francisco), “among the design objectives was to create retailing that was not just another T-shirt store. The merchandise is high-quality athletic and sports fashion goods from Russell Athletic and Gear for Sports, plus desk accessories, neckwear, watches and diploma frames.”

On a more practical level, Tsao Design had to create a store that was durable (“airport traffic is brutal!”), efficient (“airport stores are small”) and economical (“we had a very limited design and construction budget”).

Using standard hardware, the fixtures are adaptable to both hard- and soft-line products. Sliding panels in the perimeter millwork, with storage shelving behind, maximize stock area. And plastic and wood veneer laminates protect the fixture edges from damage due to rolling luggage. 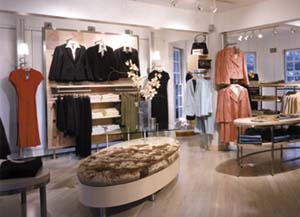 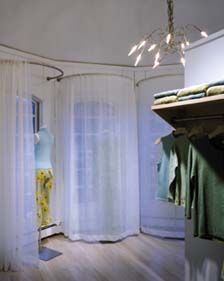 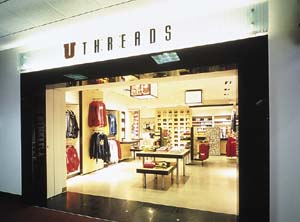 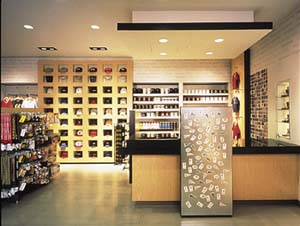