Near Ocala, Fla., a retirement community called The Villages is so large that it has its own zip code. The area is known for racehorse breeding, with an upper-income lifestyle to match. So when ABC Liquor, now ABC Fine Wine & Spirits (Orlando) decided to revamp its image in Ocala with the help of Tampa-based design firm api(+), it aimed to play to a demographic with a taste for fine wines, but neither cellars nor storage space.

“Doing recon with the client, we realized they had a lot of services they weren’t promoting to customers,” says senior designer John Scheffel. “We wanted to emphasize these benefits.”

Past stores had attached bars, but with a shift to a mostly female shopper base the retailer wanted to emphasize its wine selection to the area’s affluent customers. Store managers told the design team they were selling more and more wine by the bottle, and fewer larger jugs, and they were tired of being seen as a corner liquor store.

Api(+) developed a prototype for 11,000-15,000-square-foot spaces that divided the floor into four departments viewable from the entryway. These include a wine vault, for which users receive a key to an individual, temperature-controlled storage area, replete with a backup generator. “If you’re spending $100 on a bottle of wine, it’s a nice amenity,” says Tom Henken, vp, director of design for api(+).

Replacing beige-colored walls with vibrant, festive, tones helped delineate zones for beer, wine and liquor. The colors are drawn from a refreshed ABC logo: “The goal was to make these new [store] colors compatible with the rebrand, so we shifted away from playful, kidlike primary colors on the logo type to more complex hues of the same colors,” Henken says.

According to Henken, “being friendlier, especially to the female customer, meant offering more information about the wines at the point of sale.” The new design features signage along perimeter walls and above gondolas that delineates wine by varietal and region; spirits by origin and type; and beers by variety (lagers, pilsners, etc.).

The firm also worked with ABC’s in-house sign shop to create bold, simple department markers made from white high-density foam that are engaging but direct.

Scheffel says the new design has sparked enthusiasm from ABC employees as well: “One thing we haven’t seen before is a sense of pride that they have with this new design. Their old stores used to be cluttered with signs, and merchandizers would come in with their own displays. Now, ABC is strictly controlling that. You don’t see anything pop up in stores that shouldn’t be there.” 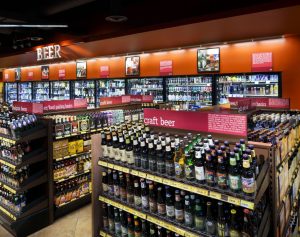 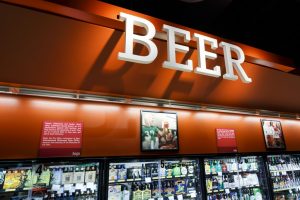 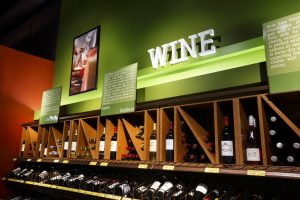