Full Length of the Ice

The National Hockey League goes all out in opening a new flagship store on Manhattan’s evolving West Side.

NEW YORK CITY is a work in progress, always adapting to the conditions of the day. With the opening of Manhattan West Plaza in September above the Long Island Railroad train yards, the National Hockey League (NHL; New York) secured a prime location for a new flagship store strategically positioned between Hudson Yards and the Moynihan Train Hall; adjacent to which is the Beaux-Arts style New York Post Office and the world-famous Madison Square Garden.

The NHL and Fanatics (Jacksonville, Fla) partnered with TPG Architecture (New York) to design the 9000-square-foot flagship as an homage to the spirit of the sport. The contiguous architecture in the plaza is defined by gracefully curved building façades.

This curvilinear aesthetic, consistent with many of the principles of hockey, was factored into the overall design concept of the store. “The store represents the things that are eternal and beautiful about hockey, the gleam of the ice, the curve of the dasher boards, the shining arc of a skate blade,” says Alec Zaballero, Managing Executive at TPG. “The ambience captures the athleticism and coordination of the ‘knights on ice’ who play the game.”

The confines of a small street level and an oversized upper level presented significant challenges. To promote movement and maximize merchandise exposure, focal points like 28 high-definition video displays were strategically positioned throughout. Customer engagement begins with an evocative palette of surface treatments, graphics and purposely positioned merchandise. The perimeter wall toward the left of the entrance is clad in barn board, a nod to the origins of the game first being played in covered field houses or barns. The barn siding also serves as a display for the 32 NHL team logos. Positioned in random order, fans are encouraged to find their team’s logo and the corresponding cap merchandised below.

A selfie moment adjacent to the staircase invites visitors to post images, then watch them travel up the wall on a vertical grouping of monitors. Illuminated glass handrails on the staircase entice visitors to the upper level, as rubber clad steps and landings evoke images of runways leading from the locker room to the ice. Hockey terms, understood by lovers of the game, are emblazoned on the stairs as teasers.

Hockey terminology like “bar down” and “snipe” are featured on the staircase leading to the upper level.

An overlook opportunity is presented on the first landing with a view of the 60-foot-by-80-foot ice rink outside the store that will showcase NHL events and demonstrations by visiting players and teams. The second landing on the vertical journey is an homage to the original six NHL teams with their jerseys cast in a resin block that is suggestive of ice.

The defining elements of the second floor are a curved white soffit reminiscent of the dasher boards surrounding the rink, and its metal trim suggestive of the edge of the skate. Curved ceiling-mounted LEDs mimic the shape of the rink above and illuminated runway pucks embedded in the aisle below direct traffic to an exciting customization lab.

“Complete with a Hall of Fame featuring historical artifacts, the store is a pilgrimage site for hockey fans,” says Zaballero. “It’s a nod to the nuances of the game and the emotional connection between fans, teams, players and the sport they love.” 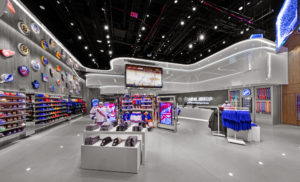 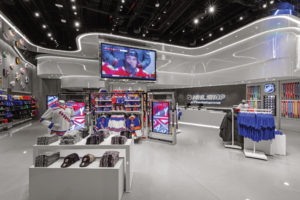 Eric Feigenbaum is a recognized leader in the visual merchandising and store design industries with both domestic and international design experience. He served as corporate director of visual merchandising for Stern’s Department Store, a division of Federated Department Stores, from 1986 to 1995. After Stern’s, he assumed the position of director of visual merchandising for WalkerGroup/CNI, an architectural design firm in New York City. Feigenbaum was also an adjunct professor of Store Design at the Fashion Institute of Technology and formerly served as the chair of the Visual Merchandising Department at LIM College (New York) from 2000 to 2015. In addition to being the New York Editor of VMSD magazine, Eric is also a founding member of PAVE (A Partnership for Planning and Visual Education). Currently, he is also president and director of creative services for his own retail design company, Embrace Design.