Nike shoes have long earned their street cred. Now, the athletic shoewear and apparel retailer is looking to do the same with its p-o-p displays.

That translates into an all-black p-o-p system, including powdercoated metal fixture towers and cubes and laser-cut cityscape wrapping around the bases. Inside the cubes, two-way reflective mirrors and lighting spotlight the shoe line. “The two-way mirror glass pays homage to tinted windows,” says McCrory. “It also has a kind of infinity-mirror effect.”

The ominous theme carries through to the graphics, which include images of dark cities, rain and snow. A looping DVD on the tower unit displays images of urban settings interspersed with graphics and Nike products.

Perhaps in an effort to further build its credibility, the brand's trademark swoosh is limited to two 3-inch logos on the front and back of the fixtures rather than splashed throughout. The result is a p-o-p display where the product is truly the hero. 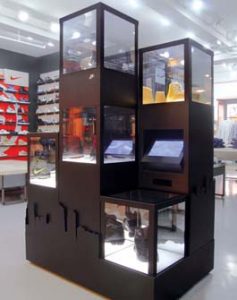 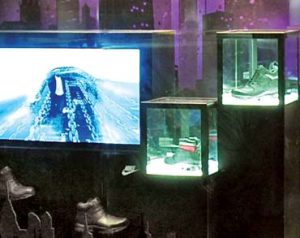