There are few retailers who protect the integrity of their design references more strongly than Target. A Target store always looks like a Target store, whether it’s sitting in a large freestanding lot, surrounded by parking, or in one of the enclosed malls the retailer is increasingly moving into.

But in the Boynton (Fla.) Town Center, Target met its match: the insistence by the developer that the retailer conform its building exterior to the prevailing Spanish Floridian architectural style.

The 44.5-acre open-air site had been a dairy farm, its cattle grazing on the grass, until a developer acquired it in 2005 and began to build a mix-used center of residential units and a 400,000-square-foot retail complex, including a Linens ’n Things and a Best Buy. It’s directly adjacent to the Boynton Beach Mall (Dillard’s, Macy’s) and not far from Palm Beach. It’s an area where 212,000 people live within five miles of the mall, and the average household income is more than $57,000. In other words, one of those growing, upscale areas Target likes to anchor.

In such opportunities, Target is willing to compromise, accommodating the developer’s wishes while still maintaining its brand elements.

In this case, the Spanish-style façade of the building – developed by Mulvanny G2 Architecture (Bellevue, Wash.), working closely with the developer’s architect – meant collonades, embossed concrete panels, planters, Bahama shutters over archways, the use of stucco and brick veneer and the construction of architectural towers with pitched terra cotta tile roofs anchoring both sides of the freestanding store, to provide the desired look and feel. Palm trees and landscaping line the outside of the building along with benches, seats and tables, giving the space a garden feel. Wooden trellises run overhead, covering but allowing sunlight to pour onto the sidewalks that surround the store.

But Mulvanny says that a lot of internal brain power goes into establishing and maintaining the Target brand, and that includes use of color, logo and exterior signage. On this Super Target store, as with all other stores in the chain, the SUPER TARGET writing and bulls-eye logo are prominent over the door, in Target red. The bright red is also featured in the planters along the walkways outside the building and in the bollards near the entrance, which have become Target trademarks. And the outside wall of the building has what Mulvanny designers refer to as “layers,” creating a Target building language consistent with the brand. 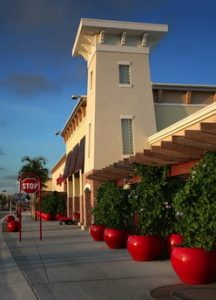 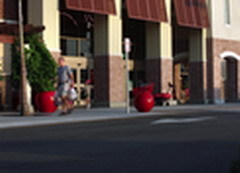