If fashion is change, few decades roiled fashion more than the 1940s. War dominated the first half of the decade, a madman rumbling in a troubled world. Murdered millions were discovered in Europe, innocent victims of an insane holocaust.

Across the globe, one four-ton bomb dropped on Hiroshima killed 140,000 people almost on impact. (Another bomb on Nagasaki added 70,000 fatalities.) Clouds of death hovered over the earth for decades, claiming an untold number of further victims.

A shaky Cold-War peace dominated the second half of the decade. Nazis disappeared, but Communists replaced them. Prosperity returned to America. War veterans returned to jobs and earned money. The birth rate escalated. Families outgrew their crowded urban apartments and fled to the countryside. What to call the residential rings now circling the cities? Someone came up with “suburbs.”

As the conflict ravaged Europe, America became isolated from the influence of Parisian fashion and searched for its own signature. Voila! A new generation of American designers. Claire McCardell originated the “American Look,” inspired by the working garb of the nation's farmers, railroad engineers, soldiers and sportsmen. McCardell and her contemporaries put their stamp on a more casual attitude. The basic construction of American sportswear was compatible with mass production, greatly influencing international fashion, store design and visual merchandising.

Rationing became an unmistakable part of American life. Wartime regulations restricted the use of fabric and trimmings. As true ambassadors of their times, mannequins were not immune to the stringent regulations – they became noticeably shorter, saving materials by reducing the length of a mannequin's legs.

Art continued its profound influence on display. In 1942, André Breton published his third surrealist manifesto. Seeking inspiration, display artists turned to both cultural and current events. In 1945, a Saks Fifth Avenue window featured a mannequin lying on a psychiatrist's couch while a “dream-dress” appeared through a transparent wall. Thought-provoking images abounded in show windows across the country. In 1948, a young Gene Moore used surrealism as a selling tool in Bonwit Teller's window: a grid of boxes, each displaying a fashionable hat. The center grid featured an elegantly dressed mannequin sporting two heads. Moore reflected, “I wanted to show a woman who loved hats so much she grew an extra head to wear them.”

As battle-weary men returned home after the war, women re-embraced traditional roles, leaving the workforce for the household. Fashion responded – longer, fuller, more feminine skirts with thin, fitted waists. Mayorga Mannequins introduced a line of “Welcome Home Mannequins” featuring the outstretched arms of a young couple and the longing gaze of their little girl. It was a quest for tranquility. Young American families searched for a new life, a new start and an escape to a new world.

The 1946 marriage rate doubled that of 1932. The postwar building boom greatly affected downtown stores. By 1947, more than half of America's households had automobiles. A new era was marked by affordable housing, wash-and-wear fabrics and suburban shopping centers. As traffic and babies boomed, a trip downtown became less desirable. Suburban stores grew in size and merchandise offerings. City merchants fought to maintain their client base. Stern Brothers offered Connecticut customers half-price commutation to its 42nd Street store.

In North Carolina, most of Belk's partners maintained a healthy confidence in their downtown locations. In 1948, Hudson-Belk decided to improve its Fayetteville Street store in Raleigh, N.C., rather than abandoning it in the wake of changing times. The city's first escalators were installed to great fanfare. One young customer was inspired to say, “It's like going right up to heaven!” Scarcely did he realize that heaven would have a suburban Zip code. 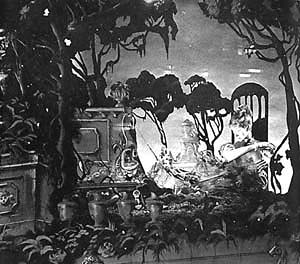