IN THE TUMULTUOUS days of the early 1960s, President John F. Kennedy offered a beacon of light when he said, “We must find time to stop and thank the people who make a difference in our lives.” And while gratitude in itself might seem humbling, it is rather a magnanimous gesture. In today’s most tumultuous times, Macy’s presented first responders, essential workers, marchers for equality, and New Yorkers who showed their toughness, fortitude and humanity in the face of unimaginable adversity, a beautiful heartfelt gift: a thank you note inscribed within the iconic retailer’s celebrated holiday windows.

In this year of trial and tribulation, the retailer’s holiday windows projected an even more important message than ever before with the theme “Give. Love. Believe.” Scott Devine, Macy’s VP of Visual Merchandising said, “Our famed holiday windows this year reflect the power, grit and spirit of our resilient community. We want to thank first responders, essential workers and everyday New Yorkers who came together this year to support each other and the city we call home. With a dose of whimsy and a dash of sparkle, we hope our love letter serves to enchant, delight and honor our fellow New Yorkers as we celebrate the holidays.”

Macy’s unveiled this year’s windows in its Herald Square flagship November 19. Devine explained, “Typically, each holiday window display takes nearly nine months to complete from concept to execution. In our pivot to honor the spirit and resilience of New Yorkers during this challenging year, we produced the windows in half the time. A gift to New Yorkers and visitors alike, it takes a dedicated team of Santa’s helpers to bring our famed windows to life each holiday season – including Macy’s display, graphic and sculptural artists, animators, carpenters, electricians and lighting experts.”

Macy’s annual holiday street theater is appropriately celebrated in a bank of six windows on the Broadway side of the world-famous department store at Herald Square. The first window features a bustling New York City scene complete with bright neon signs in an expression of gratitude that says “Thank you” in 16 different languages. No fewer than 10,000 fiber optic lights illuminate the miniature sidewalks of the New York display as the Empire State Building stands tall with Macy’s mesmerizing fireworks rocketing from its tower in celebration.

Windows number two and three offer a humorous look at a cheerful troop of Macy’s whimsical hand-sculpted elves diligently decorating oversized letters spelling out “Thank you” in a cityscape complete with clapping hands in support of first responders and essential workers.

Window four is a testament to the central theme of all the Macy’s holiday celebrations throughout the years: the joy of giving. This window poignantly illustrates a feeling of unity and the hopeful spirit of New Yorkers as they believe in love, equality, and of course, Santa!

Putting a holiday ribbon and bow on the entire festive and appreciative bank of windows is the presentation in window number six where letters spelling out “Thank You” dance across a digital screen as visitors and viewers shuffle the letters through interactive movement in front of the window.

Even in the face of adversity and uncertain times, Macy’s has demonstrated the importance of embracing the joys of the season and more profoundly, in expressing gratitude to those who made it possible for us to celebrate. 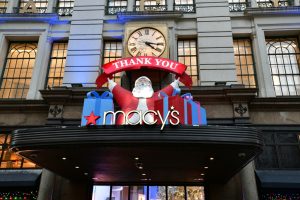 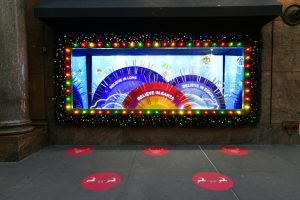 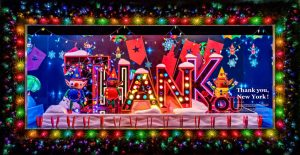 Great Expectations for the Year Ahead

Eric Feigenbaum is a recognized leader in the visual merchandising and store design industries with both domestic and international design experience. He served as corporate director of visual merchandising for Stern’s Department Store, a division of Federated Department Stores, from 1986 to 1995. After Stern’s, he assumed the position of director of visual merchandising for WalkerGroup/CNI, an architectural design firm in New York City. Feigenbaum was also an adjunct professor of Store Design at the Fashion Institute of Technology and formerly served as the chair of the Visual Merchandising Department at LIM College (New York) from 2000 to 2015. In addition to being the New York Editor of VMSD magazine, Eric is also a founding member of PAVE (A Partnership for Planning and Visual Education). Currently, he is also president and director of creative services for his own retail design company, Embrace Design.