In the past couple of weeks, two major sports stores have opened in the U.K., one in central London and the other on its periphery. The former is a “power concept” from U.S. retailer Foot Locker. It is located at the far western end of Oxford Street, making it about as downtown as it’s possible to get in the city. It trades from two floors and, crudely, the ground floor is about selling shoes aided by screens and interactivity, while the basement is about free haircuts (for the duration of the opening period at least), video games and sneaker refurbishment.

This is an expensive place to operate from, so its size is limited, but at 7000 square feet it is still a sizable shop for the area. It is also very busy, although not necessarily with sporting types. This is more about having the athleisure footwear that you will feel proud wearing in the middle of a major conurbation.

Now head to Thurrock, about 25 miles east of central London and take a look around the 100,000-square-foot Sports Direct store, which just opened. This location is also focused on fashion and sport, but it takes an all-encompassing view of the sector with running tracks, bright neon lighting in white and purple, and a beauty counter that wouldn’t look out of place in a ritzy standalone boutique.

The question in both cases is whether these are sports stores? Both have names that would seem to indicate something to do with being active, but both are increasingly about fun, maybe experience, and yes, perhaps a bit about sports. The truth of the matter is that what should be expected of a sports store has changed considerably over the last few years and these are just instances, big and relatively small, of that gradual shift. Expect further evolution. 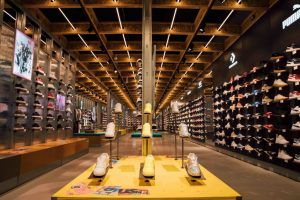 Make the Mall Stack Up

Lowe’s to Debut Petco Shop-in-Shops in Some Stores