When you think of sustainable farming, cannabis might not be the first crop that comes to mind. But for Oregon’s Gnome Grown (Oregon City, Ore.), sustainable cannabis farming is a lifestyle.

According to Stone, Gnome Grown’s lead grower Dan McAllister – the inspiration for the gnome motif – takes the ethos and practice of sustainability to heart, and the interior needed to reflect that. “Their plants are put in the ground – literally – and their soil is made to last for generations of plants,” Stone says. “There are bugs, the plants are out in the open, they never touch a pesticide … the first artificial thing their plants touch is the butane from a lighter.”

In designing the stores, the biggest challenge for Stone was the timeline. While Gnome Grown was working with city hall to obtain the rights to open, a second location was already being brainstormed. The city also wanted the stores to open within four months of the application being processed, so the design phase had to move quickly and efficiently to be completed in time. Stone, based in the Phoenix area, worked closely with a millworker in San Diego, and coordinated the process between all three teams involved.

Making the process a little easier, the owners were accepting of the two locations having a consistent look. “From a design standpoint, we were copying and pasting quite a bit,” says Stone. “One location was in a little house, so we naturally tapped into more of that flavor, while the other was a freestanding, commercial-type space.”

In the second, 1800-square-foot space, the ceiling was the biggest issue. Aesthetically unpleasing and only 8 feet in height, Stone opted to open it up and specify skylights to be installed. The exposed rafters were wrapped in drywall to give them a clean, geometric look. Concealed LEDs illuminate the rafters at night, adding an eye-catching element.

“We wanted to make it more about a shopping experience and make it approachable, especially for the local people who had never had dispensaries in their town before,” Stone says, “so the design was nice, but not luxurious or off-putting to a working-class community.”

Twenty- by 20-inch shadow boxes with oversized, artistic renderings of bugs are a direct call-out to the owners’ farming, as is a topographic map of the local area in the Beavercreek Road store, showcasing the owners’ journey from farming to opening stores. “The topographic map is a nod to Dan, who is truly the center inspiration of absolutely everything I came up with for these stores – the map is his signature story.”

Other moments include a powdercoated teal gnome head that pops out when customers pull the door handle. And in the end, each touch – even small moments like these – helps create an emotional connection to such a uniquely quaint brand. 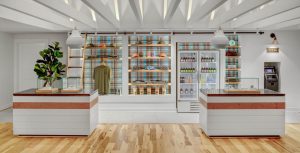