FOUNDED IN 2013 as a medical cannabis company, Portland, Maine-based Grass Monkey recently moved into the recreational realm with the legalization of cannabis in Maine. With its first brick-and-mortar rec concept, Grass Monkey wanted to break away from the norm when it came to dispensary design.

“When we met with Grass Monkey at the beginning of the process, the core essence of what they said was, ‘We don’t want to hide behind the fact that it’s now legal,’ ” says Johnnie Rush, Chief Business Innovation Officer at The McBride Co. (Manchester Center, Vt.) the firm charged with the space’s design.

Unlike many dispensaries, which may come off as contemporary or clinical – especially depending on their clientele – Grass Monkey doubles as an art gallery and features an eclectic aesthetic with bespoke art, graffiti and biophilic moments. Renowned street artist and Co-Founder, Creative Director of Klughaus (New York), Valentino Mikalef was brought in to create street-art-inspired graffiti onsite.

The cashwrap area is arguably the star of the show with a 6-foot-tall sculptural, graffiti-laden banana drawing customer attention. Wooden slats with a bright green to yellow gradient – like a ripening banana – are situated around the top of the cashwrap, and an eye-catching gorilla statue with a plant growing out of its head like a green mohawk sits toward the back. Other touches include monkey-inspired finishes and lighting (i.e., tiny monkey sculptures hanging onto light fixtures in the waiting area), as well as clever callouts to film phenomenons like “Reefer Madness” and “King Kong.”

“The question was: how do we combine these elements to answer, ‘Why is this in Grass Monkey’? Some are obvious like a 4-foot gorilla. But when you see an illustrated poster of ‘King Kong’ and he’s holding a bong, it starts to get funny and clever. The clever moments were balanced throughout the store,” says Rush.

Rush explains that the art in the space is so popular that some customers have asked for printed copies. With this in mind, The McBride Co. thought ahead for future interior adjustments, “We wanted them to have a lobby space that could also be an area where they could put non-cannabis related products, so they can sell things like T-shirts and mugs and hats,” Rush explains. “Or if legalization becomes the norm, there won’t be a need for a waiting room anymore. If that’s the case, what we’ve done is design interior partitions that can be removed so they can convert that space when and if the laws change.” 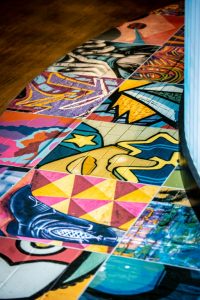 Carly Hagedon is the Managing Editor of VMSD magazine. She is a graduate of the University of Cincinnati, where she studied Journalism—Magazine Writing and American history. She also currently serves as a board member for the Greater Cincinnati Chapter of the Society of Professional Journalists (SPJ).

NanoDesigner Tool Offered by Nanolumens for AEC and Design Community