The day Paul A. Sperry fell overboard while sailing on the Long Island Sound in the mid-1930s, he probably wasn’t considering his future stores’ designs, or whether his forthcoming creation would be sold in stores at all. But roughly 81 years after the event which triggered the invention of the Sperry Top-Sider shoe, the namesake brand was ready for a reboot.

Over the past century, Sperry has gone from designing niche sailing shoes to selling mainstream  footwear, yet throughout its complex history, it’s maintained a visual identity synonymous with boating. Presently, that’s evolving.

Sperry recently expanded its accessory and apparel offerings, which it wanted to showcase in store, leveraging the opportunity to connect to a wider audience.

“Sperry wanted to maintain the heritage customer they have, but also present itself in a way that’s interesting to a younger consumer,” says Seattle-based Ron Singler, senior vp, sector leader, retail stores, CallisonRTKL (Baltimore). Singler explains, however, the ideal customer isn’t necessarily defined by age, but rather, by lifestyle.

“We call our target consumer ‘the Intrepid,’ ” echoes Heather Dietrichson, director of design and construction, Wolverine Worldwide (Richmond, Ind.), the parent company of Sperry. “This consumer is bold, adventurous and courageous; not afraid of [a] challenge, and one who would ‘jump in.’ ”

Finding ways to support the expanded merchandise offering proved to be an obstacle for the design team.

“The merchandising capacity was a big deal,” says Singler. “The stores vary in size, and they were looking to up the ante with the apparel and accessory mix. A younger consumer is more accustomed to accept a denser presentation.”

Singler explains another hurdle was preserving the connection to the brand’s sea heritage, while broadening the appeal: “The previous version of the store was very East Coast,” says Singler, “but there are also people on the West Coast that really dig Sperry Top-Siders, too. It didn’t have to just be a Northeastern thing.”

This was accomplished through subtle design details (like dock ties as fixture handles) and with playful graphics referencing water. The materials, flooring and lighting exude a contemporary sea shack ambience without being literal.

“[We wanted to] evolve the clean, white New England beach house design to reflect a grittier, patina environment … [to] value our New England seacoast heritage and also celebrate that our brand is global and seaworthy to reach other markets,” says Dietrichson.

Another way of elevating authenticity was by promoting its original product: “Sperry wanted to maintain the notion of their core heritage footwear,” Singler says. “We resolved this by creating a life preserver feature wall that anchored the back of the store … the orange color draws attention and allows us to highlight the classic Top-Sider footwear as a foundation. It became a destination.” 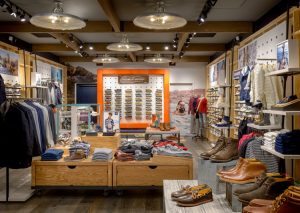 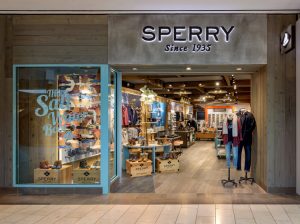 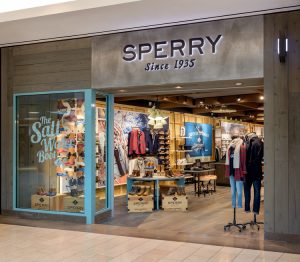 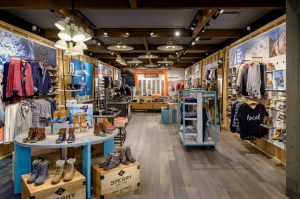 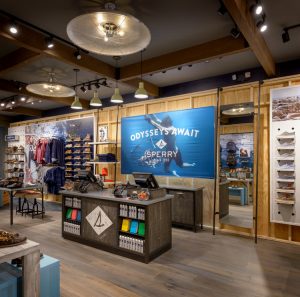 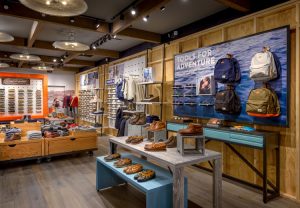 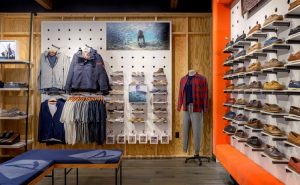 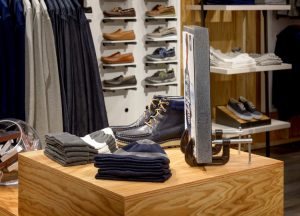 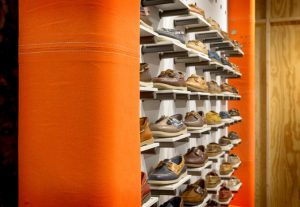 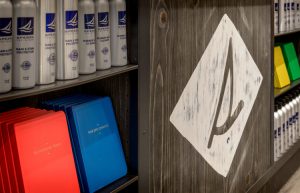 Glossier Lays Off Third of Workforce